Magnificent villa of 450m², in the heart of a large property in Ses Salines ,Majorca( Balearic islands). Contemporary...

villa located in the residential area of Sa Farola, 2 minutes walk from the small beach and 5 minutes by car from...

Majorca
Hundreds of locations availables in Majorca
Ibiza
Ibiza: never seen before!
Minorca
Minorca: the most unknown, it's the most unexpected
Formentera
Your dream holidays in Formentera

The Balearic Islands are an archipelago of Spain in the western Mediterranean Sea, near the eastern coast of the Iberian Peninsula.

The four largest islands are: Majorca, Minorca, Ibiza and Formentera.

MAJORCA or MALLORCA (Catalan: Mallorca), is an island located in the Mediterranean Sea, one of the Balearic Islands.The capital of the island, Palma, is also the capital of the autonomous community of the Balearic Islands. The Cabrera Archipelago is administratively grouped with Majorca (in the municipality of Palma). The anthem of Majorca is La Balanguera. Like the other Balearic Islands of Ibiza, Formentera and Minorca, the island is a highly popular holiday destination, particularly for tourists from the United Kingdom, Germany, Ireland and the Scandinavian countries. The name derives from Latin insula maior, "larger island"; later Maiorica, "the larger one" in comparison to Minorca, "the smaller one.

IBIZA (Catalan: Eivissa), is an island in the Mediterranean Sea 79 km off the coast of the city of Valencia in Spain. It is the third largest of the Balearic Islands, an autonomous community of Spain. Its largest cities are Ibiza Town (Catalan: Vila d'Eivissa, or simply Vila), Santa Eulària des Riu and Sant Antoni de Portmany. Its highest point, called Sa Talaiassa or Sa Talaia, is 475 m/1,558 ft above sea level. The island is well known for its summer club parties wich attract large numbers of tourists, but the island and the Spanish Tourist Office have been working in order to promote more family-oriented tourism. Noted clubs include Space, Pacha, Privilege (ex Ku), Amnesia, DC10, Eden and Es Paradis. Probably the most famous bar on the island is Café del Mar.

MINORCA or MENORCA is one of the Balearic Islands located in the Mediterranean Sea belonging to Spain. It takes its name from being smaller than the nearby island of Majorca. In October 1,993, Minorca was designated by UNESCO as a biosphere reserve.

FORMENTERA is te smaller and more southerly island of the Pine Islands group (comprising Ibiza and Formentera, as well as various small islets), which belongs to the Balearic Islands autonomous community (Spain). The island is 19 kilometres (12 mi.) long and is located about 6 kilometres (4 mi.) south of Ibiza in the Mediterranean Sea. Its major villages are Sant Francesc Xavier, San Ferran de ses Roques, El Pilar de la Mola and La Savina. Formentera is renowned across Europe for many pristine white beaches and the fact that nude sunbathing is allowed on most of its beaches. The island was formerly reachable only by boat from Ibiza, making it the quieter of the four islands, but in recent years regular passenger service from the Spanish mainland has increased tourism.

CABRERA is an uninhabited islet in the Balearic Islands, Spain, located in the Mediterranean Sea off the southern coast of Majorca. It is currently a National Park. The highest point is Na Picamosques (172 m.). Cabrera is the largest island of the small archipelago that includes (from south to north) the islands of Estells de Fora, L'Imperial, Illa de ses Bledes, Na Redona, Conillera, L'Esponja, Na Plana, Illot Pla, Na Pobra and Na Foradada. 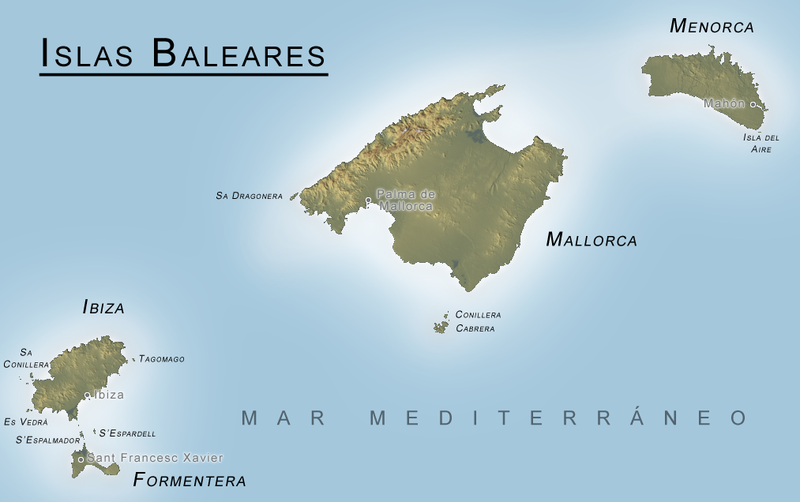 VacationKey offers you a great choice of lodgins. For vacations in family, you can choose our comfortable apartments and holiday homes from 2 to 20 persons. If you wish to travel with friends and have fun, choose our luxury villas in Ibiza.