19th century architect's house of 250m² on a plot of 3000m² with trees. This French Riviera villa rental has a contemporary style private pool (6/6). During the restoration of the house, many elements have been renovated identically to preserve the historic character of the property. Ceiling frescoes are original, cement tile floors or red tiles, as well as fireplaces and mirrors preserve the authenticity and character of the villa. It was also owned by a well-known English painter, a famous French engraver, illustrating the silver coins of 50 centimes and 2 francs, a French actress and an American novelist. The house consists of two floors, on the ground floor two living spaces and dining room, with a separate kitchen, a bedroom and a bathroom, upstairs the 4 bedrooms, two with fireplaces. All rooms offer large spaces and large windows. Nearby, the sea and its sandy beaches at 5 km, the Valescure golf at 3 km, the center of Saint Raphael and its summer activities at 1.5 km. 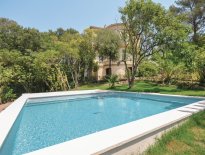