Israel Zimmer Vacation Rentals in a Luxury Provence Suite in the village of Amirim.

We are located in Amirim, a well known picturesque holiday village, at the heart of a nature reserve area of upper Galilee in Northern Israel. Our B&B is situated at the edge of the village, and it consists of three private suites:

All the units overlook a stunning vista that stretches from the Mediterranean Sea in the west, the Sea of Galilee,and east to the Golan Heights.

All the suites are stone masonry built to the highest standards, with large windows, and lavishly furnished by the owner, who is a qualified architect and interior designer.

The village of Amirim is known also as the “Vegetarian & Vegan Village” of the Galilee, due to the fact that its entire community is based on vegetarian and vegan dietary principles and a healthy life style. It is a popular tourist attraction owing to its cool and mild weather conditions all year round, the scenic views of “The Kinneret” (known also as the Sea of Galilee) and the beautiful gardens, orchards, and natural woodlands that surround its houses. Our village is situated at the centre of Upper Galilee, making it one of the best starting points for excursions around the district.

Whether you wish to visit religious holy sites, or nature reserves, or take a horse ride, or a Kayak ride on the rapids of River Jordan, or simply relax in a boat trip on the Sea of Galilee, the journey from Amirim village to any one of these, is in most cases not more than half an hour driving distance, or perhaps one hour in some cases. Also there are beautiful hiking routes within reasonable distance from here, and the majority of them have canyons with flowing streams, which is typical for the Upper Galilee and the Golan Heights landscape. The Golan Heights is the eastern border of the region.

*The prices refer to a couple
*Reservation of 2+ nights deserve a discount.

Ofer .... we spent few nights at the loft and this is definitely a place we call luxury !!! Lots of indulgence, amazing landscape, and the thought of the little details is just indescribable !!! Ofer thanks you with all my heart, we will definitely come back !!!

Have stayed in many Galilee and Golan B&Bs, this was, without any doubt, the best one. Came back twice and wasn't disappointed. In the ecological settlement of Amirim, three separate spacious cottages, distant of each other, each with terrace and outdoor private Jacuzzi, additional large Jacuzzi's in the grove above, overlooking the amazing view of the Galilee mountains. The whole property is a grove of fruit trees and little flowerbeds, and bathed in greenery. Total privacy, romantic and very high-end. Close to Amoud Stream nature reserve which makes a very nice walking trip. 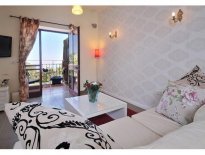